To reduce rail expenses and consistently improve performance, companies need to consistently benchmark. The reason for benchmarking is simple. If you do not benchmark, you will likely do things the same way next year as you did this year. This means the problems you have this year will not get corrected.

When negotiating with railroads that have monopoly power over your traffic it needs to be recognized that:

You will always tend to receive rate increases

You do not know what reasonable rates are for your movements.

A comparison of railroad’s historical rate changes indicate that railroads are very active with rate benchmarking. The graph below provides an example of the results from railroad benchmarking. It shows the percent change in average rate per car for all Food Product (STCC 20) BNSF movements, versus UP. 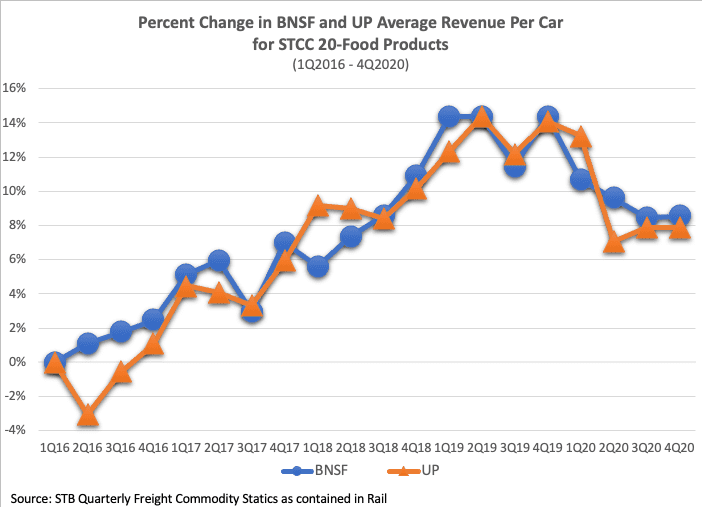 Rail shippers should learn from the practices of railroads and use the data available to them to benchmark their rates against the rates of their competitors.

This is valuable information that will show whether a shipper is being put at a competitive disadvantage in its markets. This market intelligence helps shippers improve their competitive position in markets.

Benchmarking is just common sense. It is always important to find out how well you are doing in the market compared to other companies. To demonstrate, the chart below tracks Grain Mill Products (STCC 204) rates, for movements into the Dallas TX market from major origin locations. Rates are organized on the vertical axis and distance shipped on the horizontal axis. 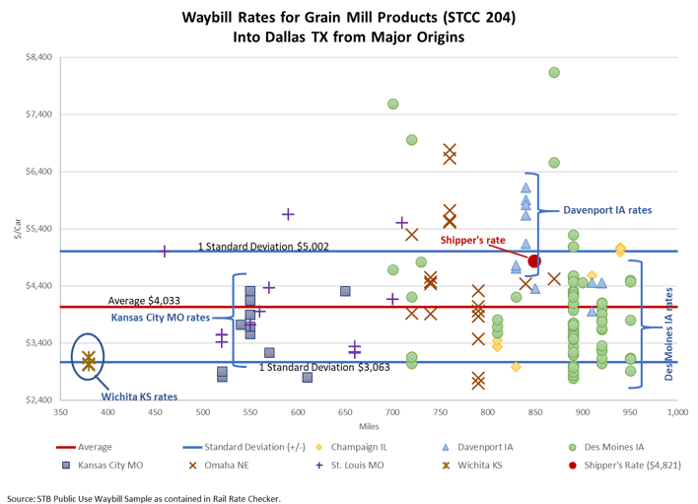 The first thing to notice in this illustration is, that the miles for a movement do not necessarily determine the level of the rate for a movement.

For example, movements from Wichita, KS go the shortest distance to Dallas, TX (370 miles) and movements from Des Moines, IA go the longest distance to Dallas, TX (950 miles). However, many of the rates for both of these origins are similar even though Des Moines, IA moves go almost three times the distance. A similar relationship happens with moves from Kansas City, MO. All the rates from Kansas City, MO are similar to rates from Des Moines, IA even though Kansas City, MO moves go one half the distance to Dallas, TX. This shows that just because you have a geographic advantage in a market does not mean you have a competitive advantage in a market. This is important information for shippers marketing and sales departments to know.

Once you know how your rate stacks up against competitors in a market, you have a different negotiation with railroads. You also have different preparation for negotiations, especially if this is one of your more important markets. There are a number of questions the benchmarking exercise raises:

Benchmarking rates into a market leads shippers to explore other alternatives for reducing and evaluating rates. The carrier will always say your rate is a market rate; but the carrier’s interpretation of a market rate will include the highest rate any other shipper pays, not necessarily the average rate and certainly not the lowest rate. As long as there is one other shipper with a higher rate, then your carrier’s interpretation will likely be that you have good rates.

Benchmarking helps you educate railroads on:

It is important to benchmark rates with railroads that have monopoly or duopoly power over your traffic. It is important because, this is how you determine what rates are reasonable for your traffic. Without the knowledge obtained from benchmarking you will always tend to get rate increases. Companies benchmark to cut costs and improve performance. Railroads do this and so should shippers!

Why Some Rail Shippers Get Lower Rates

Rail Rates – When is Enough, Enough?
Scroll to top