Rail shippers all agree that it is better to have multiple rate options for a movement instead of just one.

The easiest way to increase your rate options is to have railroads provide Rule 11 rates through multiple gateways.

The following bar chart provides an example of the potential reduction in rail expenses a shipper can obtain from using a Multiple Rail Gateway Request for Proposal (RFP) on Rule 11 moves.  Each bar represents the percent change from existing rates using a Multiple Gateway RFP and a RFP based on existing rail routes for captive and competitive moves. 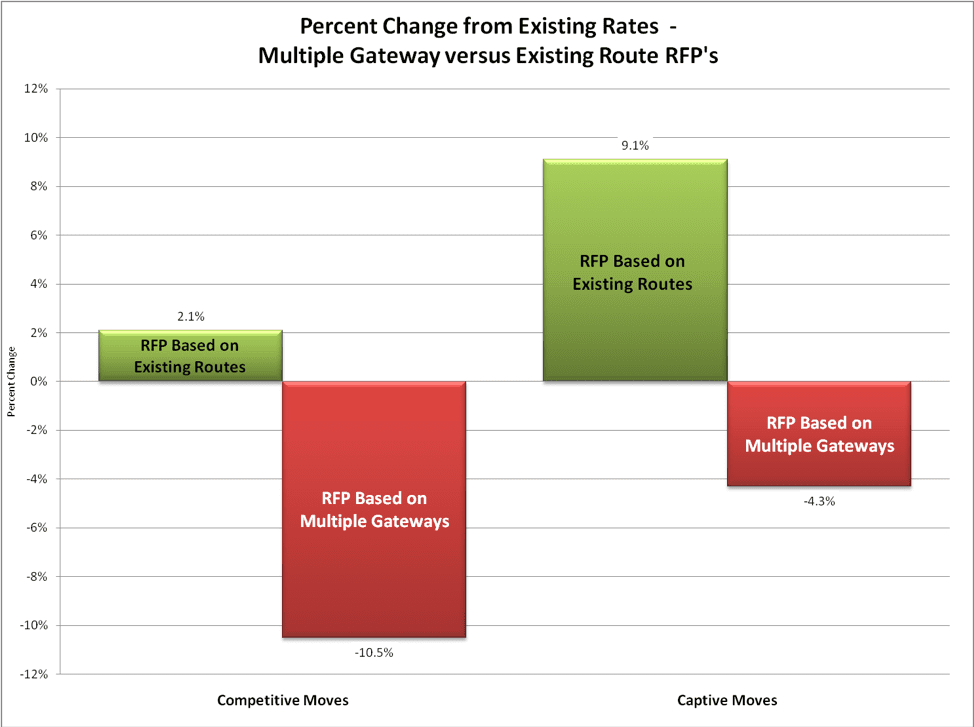 The bars reflect an analysis of actual results from bid evaluations. The chart shows a reduction occurs in both captive and competitive rail expenses when Multiple Gateway RFP’s are used, but rate decreases are much larger on competitive movements.

The problem with Multiple Gateway RFP’s is: they have been very difficult to create and evaluate.

Fortunately, that has changed! Multiple Gateway RFP’s are being used by more shippers as improved technology now makes it easier to create and evaluate them.

In the past, to create a Multiple Gateway RFP you needed to know the following for each movement:

The flow chart below is for the creation of a Multiple Gateway RFP for an NS move. This move is originating in Knoxville, TN and terminating on either the UP or BNSF railroads in Los Angeles, CA.

The flow chart shows that the shipper’s RFP’s for NS, UP and BNSF must include a request for nine (9) rates from the three railroads for this one movement:

If a shipper has hundreds of moves, in the past, the RFP could take months to assemble for all railroads.

Significant cost reductions normally result from a Multiple Gateway RFP, but this process was always significantly more time consuming. This has changed!

The Rail Cost Control (RCC) program represents a significant improvement in technology that makes it easy to create and evaluate Multiple Gateway RFP’s. To do this, shipper’s moves are loaded into the program’s Database Management System. Then, the program’s Cost Optimizer automatically generates Multiple Gateway RFP’s for all movements on each railroad through commonly used gateways. The RCC creates the RFP so it automatically reads railroad responses to the RFP.

The Rail Cost Optimizer then automatically:

The Rail Cost Control program is an Escalation Consultants product that represents a significant improvement in technology. The RCC has a material impact on a shipper’s rail expenses.