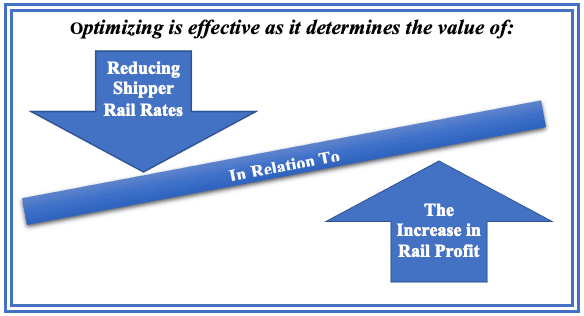 Millions of dollars in value are created for shippers and railroads through the optimizing process:

This optimizing process starts by a shipper calculating the railroad’s long term Variable Cost (Cost). This Cost is calculated for ALL rates in a railroad’s bid. Shippers frequently calculate the railroad’s cost for a movement to show that a railroad is making too much profit from the movement. Unfortunately, this is frequently not very effective.

A more productive use of railroad costs is to better understand how a shipper can increase or decrease railroad’s profits with volumes it can add or takeaway in negotiations.

Calculating railroad’s cost for all of a shipper’s moves, opens opportunities to create greater value for both shippers and railroads. It is best for a shipper to use a macro processing program like the Rail Cost Control Program  (RCC) to calculate the cost of all rail moves at one time. Calculations are effortless, as rail costs are automatically calculated and maintained for use in RCC’s bid evaluation optimizing program.

Once a shipper knows the railroad’s costs for moves, it has a much better understanding of the economic impact of adding, or taking away, moves from railroads in the bid evaluation. When a railroad’s rates are reduced it becomes the low bidder on more competitive traffic in the bid evaluation. As a railroad wins more competitive traffic, its carloads increase as well as the profit it makes from the shipper’s business.

It is important to find win/win opportunities with your railroads. These opportunities come from understanding the relationship between reductions in spend a shipper receives from reduced rates versus the increase in profit the railroad receives from obtaining additional volumes.

As an example, if competitive rates are reduced by 11% on a railroad resulting in $6 million in savings this looks like a great deal for the shipper. But is this a good deal for the railroad? The shipper needs to know the economic impact on the railroad. If the railroad is awarded an additional 3,100 carloads, because it is now the low bidder on more competitive carloads, the shipper needs to know how this impacts railroad profit. Table 1 provides a summary of the results for the 11% rate decrease.

Optimizing created $6 to $7 million in value for both the shipper and the railroad.

Though the value created by the 11% rate decrease is significant, it may not be the best rate decrease for either the shipper or the railroad. The question that needs to be answered, is how do you know the rate decrease that creates the most value for the shipper and railroad? Would a larger 15% rate decrease generate greater value or would a lower 7% rate decrease work best. Answering this question, you’ll need to know the optimizing Pivot Point for rates in each railroad’s bids for competitive traffic.

Understanding each railroads Pivot Point is important as it:

It should be noted that though the calculations for optimizing are complex the process has become very easy to perform. For example, the Pivot Point is automatically calculated for the rates in each railroad’s bids in RCC’s: Cost Optimizer.

Our next blog will address determining the Pivot Point for each railroad and bringing captive rates into the optimizing process.